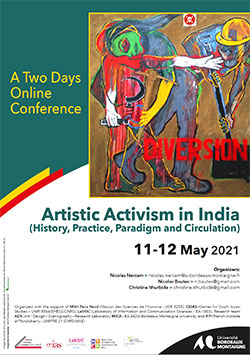 The expression “Arts Activism” is often used since the 1990s in reference to a significant part of the production of contemporary art throughout the world, without any clear definition. Numerous international events – the Berlin Biennial in 2012, the Venice Biennial in 2017, the Manifesta 12 held in Palermo in 2018, or the Kochi-Muziris Biennial entitled “Possibilities of a non-alienated life” in 2018-19 among some other such events – made it a central question. They all broached a large spectra of thematic going from ecology, anti-globalization, feminism, responsible consumption, social and economic alienation or immigration. Similarly, a number of academic works (C. Mesch 2014, D. Vander Gucht 2014, J.M. Lachaud 2015, N. Thompson 2015, 2018, P. Weibel 2015, G. Didi-Huberman 2016, G. Sholette 2017, 2018, D. Berthet 2018, M. Reilly 2018) and magazines (the May 2019 Artforum International for example) address the question of contemporary forms taken by the interrelations between art and politics.

“Artivism” encompasses artistic actions, whose direct or indirect ambition is to tackle social and political issues, reviving agitational practises defined in resistance to the planetary ideological hegemony they refer to as “neoliberalism”. This resurgent awareness of the political nature of artistic creation tends to question consensual discourses on the neutrality of art and aesthetics, often confined in their “autonomy” and impervious to the disorders of the world. Within artistic activism a dialectic between two entities, traditionally perceived as being of a different nature, is played out: on the one hand the field of art (too often defined as autonomous, with no other functionality than its own); on the other hand the field of politics and social activities (thought out as a praxis of the exercise of the power in an organized society). The central question posed by artistic activism could be stated in this way: How can we evaluate the capacity of art (visual and performing arts, literature, theatre, dance, video, cinema, etc.) to function as social and political protest?

The diversity of actors involved in such practice, and their intentions, targets and modes of expressions, make it difficult to clearly envision the very function of art in politics. Artistic expressions are large, going from so-called traditional medium (painting, drawing, sculpture, theatre, etc.), or in situ ephemeral practices inscribed in particular times and places (urban spaces, neighbourhoods, specific sites, warehouse, etc.), to interventions happening through the Internet (net art, hacktivism, etc.). So large are the ideological backgrounds of their authors, being individuals or collectives, all mediated by rhetoric and diversion practices, expressing different postures as well as distinct levels of radicalisms, etc. Therefore, to overcome the singularities of art activisms, it is necessary to engage a common reflection enabling the drawing lines of analysis in order to build a robust analytical framework.

Two radically different positions can be delineated, within all these practices:

1- The first describes artistic action as part of a movement of enhancing the functionality of the message and political action, in order to make the latter more “attractive”. In this case, the activist-artist often tends to adopt a rather sympathetic position with the object of the political discourse. If this type of intervention allows him/her to cherish the hope of generating awareness and some social and political changes, it contains the risk of ideological subjugation, drifting into the art of propaganda and the reduction of aesthetic innovation.

2- The second relates to artistic action oriented to the diversion and dysfunction of political action and its discourse, in the cancellation of their practical and efficient dimension. This position seems to have been adopted by a large number of activist artists around the world, in order to call out the dangers, the excesses, the flaws, the hypocrisies of this or that political actions or this or that ideological principles. It ensures a greater autonomy of the artistic action and seems to avoid any subjection to one political discourse. On the other hand, it relegates to the background the impact of artistic action in the social and political domain (in a sort of objectification of a political and social status quo).

These two contradictory traditions nourish, by mingling with each other, what we call contemporary artistic activism. An analysis of its productions sometimes reveals more or less contrasted aims. The Indian art scene is no exception and a number of artists and artists’ collectives claim to be activists (Vivan Sundaram, Navjot Altaf, Tejal Shah, Shilpa Gupta, Pushpamala N., Anita Dube, Open Circle, Raqs Media Collective, Sahmat, Vijay Tendulkar, Badal Sircar, Habib Tanvir, Namdeo Dhasal, etc.). They thus contribute to the global and local dimension of the phenomenon of arts activism.

Since the launch of the New Economic Policy in 1991, the Indian Union has undergone profound changes in all areas of activity (economic, social, cultural, artistic). The “opening” of the economy and the rise to power of the Hindu nationalist right have had the effect of deeply questioning the principles of the Indian way enacted by the fathers of Independence in 1947, based on a secularist democracy, a self-centred growth model organized around a large public sector and non-alignment.

The current political context of India, where tends to dominate religious nationalism, stigmatization of minorities, questioning of secularism, ethnic conception of the Indian nation, bone of contention around Kashmir, violence of intercommunity conflicts, etc., as well as its cultural and artistic context (advent of India on the international art scene, development of the art market and cultural economy, shift of the middle class into mass consumption, questioning of freedom of expression etc.) make the Indian Union a specific laboratory for the contemporary development of interrelationships between artistic practices and social and political commitment.

This Two-days Online Conference intends to bring together researchers and practitioners from all horizons, from artists, curators to academics, to reflect together on the various forms and conceptions of artistic activism in India since the 1990s onwards. By gathering such a diversity of profiles, this conference aims at approaching crossings, transfers, intersections between art and politics at work within Indian artistic activism, both in their transversal and global dimensions, and in all the nuances and specificities observed at the local and the micro-local scales.